CULTURAL HERITAGE
The Soča Valley was the first in Slovenia to receive the European Destinations of Excellence Award (EDEN) for the preservation of cultural heritage.

Bovec is a destination with a rich history. Among the historical events, Napoleon’s march through Predel and the World War I events are the most prominent, described by the famous writer Hemingway in his novel Farewell to Arms.

Objects, used by soldiers during the World War I on the Isonzo front, can be found in the museum collections in Bovec an Kobarid. 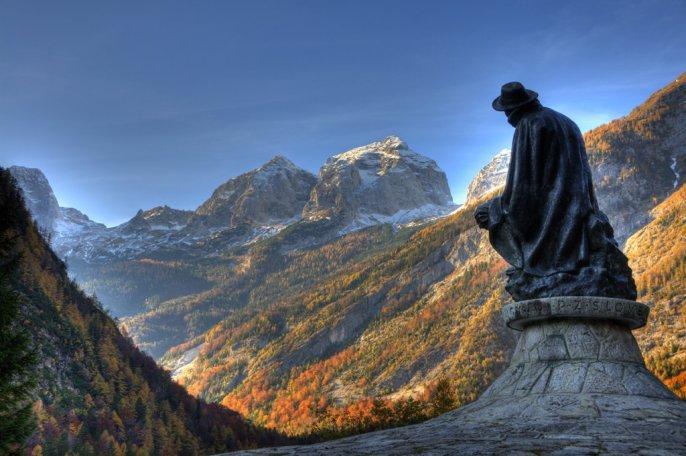 ISONZO FRONT – World War I in Bovec and the Soča Valley

The famous Isonzo Front (1915–1917), the battlefield between the Italian and the Austro-Hungarian military, was 93 km long line fought from the mighty Rombon (2,208 m) to the mouth of the River Soča in the Gulf of Trieste. The greatest battles in the mountain area in the history of humankind were marked by 11 bloody offensives by the Italian army and the last, 12th battle of the Isonzo, also known as the Miracle of Kobarid, in which the Austro-Hungarian soldiers received help by the German army and pushed the front line to the Piava River.

Those who like to research the military history, can visit the corners and the areas of the Soča Valley, where the mighty battles used to rage. The wrathful battles in the areas of Rombon, Bovška kotlina, Ravelnik, Krnsko pogorje and the mountain ridge above the Tolminska kotlina and Kobarid left many forts, caverns, trenches, the remains and cemeteries behind, which are now connected by The Walk of Peace. 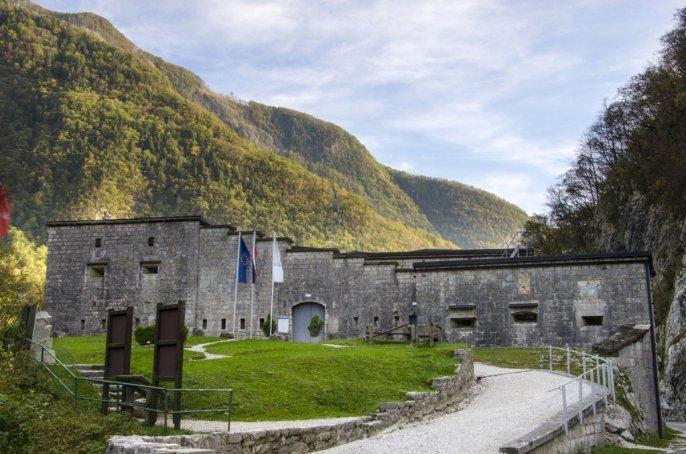 This majestic fort above the Koritnica gorge is one of the most visited cultural sights in the Soča valley. It is an important monument to the defence against Turkish invasions, Napoleon’s army and attacks during World War I.

The history of the Kluže Fort is captured in the remarkable nature, between the steep slopes of Rombon, Slemen and the 70 m deep emerald green gorges of the River Koritnica. Here you will feel and admire the draughts of the past that marked this strategically important position, also known as Bovška vrata.

In the 15th century, the Kluže Fort was a wooden fortification, intended to prevent the Turkish invasions to Koroška. Later on, a stone fortification was build. The fort obtained its modern view in the 19th century, while in the 20th century it played an important role on the Isonzo Front.
Location: The Kluže Fort lies 4 km out of Bovec in the directon of the Predel mountain pass.

Situated in the heart of Bovec, the town’s main church boasts a monumental stairway.

Features of the church of St. Ulrich:

Church of the Virgin Mary in Polje

The church of the Virgin Mary in Polje is used as a venue for a variety of events, including concerts thanks to its acoustic properties.

This Gothic church was built in the 16th century.

Features of the church of the Virgin Mary in Polje:

This Gothic church was built in the 15th century.

The ruin with preserved peripheral walls and a part of the pointed arch and portal have been reconstructed as a Gothic building with an open bell tower.

The church of St. Leonard is situated in the forest at Ravne, on the left side of the road from Bovec to the Kluže fort.

It was build at the end of the 18th century. In the presbytery there is a famous fresco of stoning of St. Štefan, the work of the Slovenian impressionist Ivan Grohar. The church also has a wooden Gothic sculpture of Mary the queen (Mary the queen from 1490 to 1500) and the oil painting of St. Sebastian (the original of St. Boštjan), most likely the work of Anton Cebe from the Baroque period.

The parish church in the village of Soča boasts famous paintings by Tone Kralj.

Features of the church of St. Joseph:

Access to the church of St. Joseph:
The church is situated in the village of Soča along the main Bovec-Trenta road.

Church of the Virgin Mary of Loreto

The miners’ Baroque style church of the Virgin Mary of Loreto was built in 1690.

The church is situated in Trenta in the settlement of Pri Cerkvi along the Bovec-Vršič road.

Features of the church of the Virgin Mary of Loreto

The traditional holy mass on the name day of St. Anne is held in the church of the Virgin Mary of Loreto every year.

Military cemetery in the Soča village

Behind the Church of St. Joseph and the civilian cemetery is a cemetery of Austrian soldiers who fell on the Isonzo front. Concrete crosses are aligned along the casing, a large grave, consisting of stones that lie above the cemetery. A grenade was placed on a large rock above it, a simple monument to fallen soldiers.

On the main road, next to a civil cemetery, among the military cemetery of the World War I lies a spruce. Here rest the Austrian soldiers who died in the military hospital in Trenta, as well as Russian prisoners of war who died during the construction of the road across the Vršič pass. When the Isonzo Front was founded in 1915, the Austrians needed a transport link over Vršič to move their military units forward. They brought around 12,000 Russian prisoners, captured on the eastern front, to build the road in superhuman efforts. In simple houses, poorly fed and poorly dressed, many of them died of exertion and illness; during winter, avalanches decimated the builders.

Behind the civil cemetery in Spodnji Log lies the Austrian military cemetery from the World War I. The Koritnica valley was in the last part of the Soča River, so the cemetery was arranged in the first years of the war. Iron crosses with inscription boards with the names of buried soldiers are standing on mules. The graves are arranged on two terraces and the lower one is spread around the spruce and larch. At the crossing between the two terraces there is a concrete sculpture, the work of the Czech sculptor Ladislav Kofrank. The statue represents two soldiers looking towards the top of Mt. Rombon, which took many soldiers during a tough battle. Support supports the plaque with devotees in the Slovene, Serbian-Croatian and German languages who helped with minor victories in Mt. Rombon.

Monument in the Strmec village

Monuments recall a tragedy that hurt the village during the World War II. On 10 October 1943, the German commando expedition upset its inhabitants, as partisans killed some German soldiers. The Germans killed 16 men and destroyed and burnt the whole village. Women and children ran away to their relatives and friends. During the period of governance by the Allies, from 1945 to 1947, many houses were reconstructed, but the village is mostly abandoned and today serves as a typical settlement of holiday homes.

Monument to the fallen in the Golobar battle

Along the road near the village of Kal-Koritnica stands a monument to the partisans who fell in the pasture Golobar during the worst campaign of World War II in Bovec. On April 26, 1943, when the Gradnik Brigade was established, Italian soldiers surrounded the partisans who gathered on the Golobar’s pasture, and 42 soldiers fell during the fight. Their bodies were hauled to the Kal-Koritnica village, loaded on a truck at the place where the monument is now standing, and transported to Bovec, where they were buried at a local cemetery in a common grave.

Fortress and Monument to Predel

About one kilometer from Predel’s passage, the ruins of the Austrian fortress are still visible. At the beginning of the 19th century there was a wooden fort here – on May 15, 1809, a bitter battle took place between the Napoleonic armies and the Austrian defenders. The Austrian contingent of advocates consisted of the border guard Slunj, led by captain Johann von Hermannsdorf. The supporters, despite being prevailing, discouraged all attacks and did not respond to the call for surrender. On May 18, the attackers managed to consolidate the fire and the majority of the contingent, including its commander, disappeared in the breakthrough. Emperor Ferdinand I had a wonderful monument set up in memory of brave proponents. It was exhibited in 1851. The monument is about 6 meters high, high bearing stone walls, on which it rests on pyramid carved stones with engraved inscription. The wired sculpture of the wounded lion and the beautiful fenced space further emphasize the size of the monument. The fort was renovated in 1848 and its ruins are visible on both sides of the road.

It stands by the road that climbs across Vršič’s path. The monument is the work of the sculptor Jakob Savinšek and was set up by the Mountaineering Association of Slovenia (Slovenian Mountaineering Society) at the 60th anniversary.

Memorial plate to the mountain guides in Trenta

It is built in the rock by the road under the botanical gardens of Juliana, which the Slovenian Mountain Association in 1957 dedicated to the recognized mountain guides Trenta, pioneers of Slovenian mountain exploration and alpinism. Hunters and shepherds from Trenta became famous mountain guides in the second half of the 19th century, especially during the exploration of the Julian Alps. Kugy, who is the father of the discovery of Trenta, highly appreciated his natural movement over the demanding mountain terrain, its strength, toughness, fearlessness and benevolence. Many peaks and walls are closely connected with the names of Trenta’s famous villagers. Kugy, together with Andrej Komac-Moto, managed to conquer the top of Mt. Škrlatica (1880) for the first time ever, Ivan I Berginc conquered the eastern part of the Mt.Triglav’s northern wall already in 1890. The accomplishments of Jože Komac, Anton Kravanja, father and son Tožbar, as well as other modest guides and traces of bold mountain trails, are just as famous.

You can find out more about which cookies we are using or switch them off in settings.

This website uses cookies so that we can provide you with the best user experience possible. Cookie information is stored in your browser and performs functions such as recognising you when you return to our website and helping our team to understand which sections of the website you find most interesting and useful.

Strictly Necessary Cookie should be enabled at all times so that we can save your preferences for cookie settings.

If you disable this cookie, we will not be able to save your preferences. This means that every time you visit this website you will need to enable or disable cookies again.